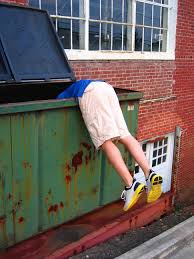 After the great turn out to the showing of the documentary film Just Eat It, which highlighted the grotesque amount of food that is thrown into the dumpsters across America, the question arose, “Is it legal to salvage food from dumpsters?” I had to admit that I did not know the answer but that I would find out.
The City of Renton Police Department stated that there is no law that exists that would prohibit dumpster diving. You cannot go onto residential property and take things from a dumpster, but commercial properties such as restaurants, grocery stores or bakeries are open market for divers. Salvaging items for resale is illegal but salvaging food for personal consumption is not.
The woman on the phone did say that to be safe she recommended just asking the business if they would mind if their throw away food was taken away instead of thrown away. Seems like a good idea. Happy diving!